Posted at 10:34h in Blog by Rimsha Author 0 Comments

Cybercrime is a genuine threat to your industry, revenues, and brand, whether you are a Fortune 500 company or a neighborhood retailer. The cost of data breaks is estimated to be over $2.1 trillion globally, and cybercrime incidents are expected to quadruple between 2015 and 2019. Executing efficient DDoS protection is critical to ensure that you have a safe website and are willing to combat any attacks. Here at the Email Shop, I will discuss the DDoS attack and tell you how to prevent DDoS attacks.

WHAT IS A DDOS ATTACK and How to Prevent DDoS Attack?

Distributed denial of service attack is a popular kind of cyber-attack in which spiteful participants overflow a Web server, service, or traffic network to disrupt their everyday operations.

DDoS assaults are performed by overwhelming messages, connection requests, or false packets from a certain web server or network. If the target server tries to cope with all requests, its bandwidth is higher and the server slows down, crashes, or becomes unavailable. The analogy of a roadway is common. When you move toward the junction, it will bring a road jam and end everybody in their way if many more cars join. Even other vehicles are following you. 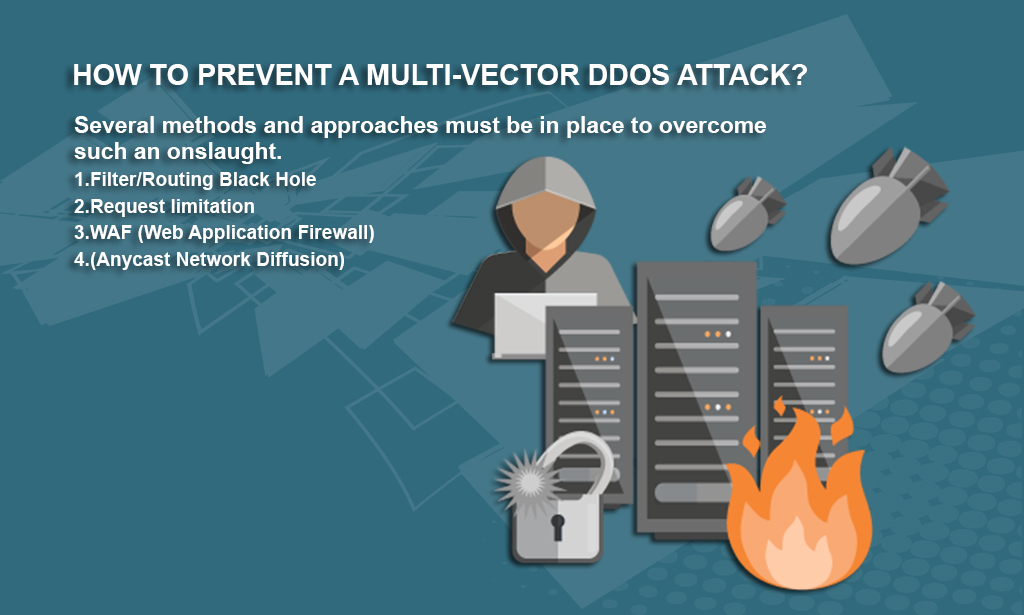 If the target server is a sensitive area for your business, the whole network infrastructure can be broken down and your business operations stopped. In addition, various attack kinds such as ransomware and extortions may also be started during a server outage, which may all have huge economic repercussions on companies.

Traffic generally comes from and contains malware from a group of infected computers and devices known as botnets. As more gadgets, in particular IoT gadgets, are connected to the Internet, this form of cyber safety hazard is easier to launch.

HOW TO PREVENT A MULTI-VECTOR DDOS ATTACK?

The most complicated cyber hack attempt because it targets many layers of the protocol stack is a multi-vector DDoS assault. The most popular supplier to multi-vector assaults is volumetrically amplified UDP vectors such as CLDAP, NTP, DNS, SSDP, and Chargen. The attacker aims to combine the legal traffic with the attacked traffic, thereby preventing mitigation. Several methods and approaches must be in place to overcome such an onslaught.

In the “black hole or null route,” the black hole steering approach filters network traffic. Since this filter is carried out without discrimination, both the legal and malicious traffic sources are drunk together and stopped. The procedure is analogous to the reaction of antibiotics, which, regardless of their properties, kill both good and dangerous bacteria.

The quantity of server requests on a certain time window is another approach to mitigating a DDoS assault. Rate restraints not only offer security for brute-force login efforts, denial-of-service attacks but also prevent other abusive attempts on the application layer.

The firewall for the web application is an application layer protection mechanism (layer 7) that operates under a certain policy set. The WAF policies have a function in the monitoring and filtering of HTTP traffic to prevent harmful transport in Web applications. It is fighting assaults, such as SQL, cross-site scripting (XSS), cross-site fraud, and DDoS. It resists cyber-attacks. To activate the defensive measures and to combat harmful actions, WAF policies can be updated at any time.

Anycast Network Diffusion functions just like a flowing river channel in tiny channels. It disperses incoming requests among a network of dispersed servers, making traffic easier to handle and prevent any disruptive behaviour for applications. Any network dependability depends totally on the magnitude of the assault and the network efficiency to resist assault.

DDoS attack prevention and detection prevention is difficult as it occurs without notice. You can nonetheless discern between a legitimate traffic increase and a possible DDoS assault via the help of individual indices.

How to prevent DDoS attack on PCs? The initial indicator your system might be compromised with DDoS when a “service unavailable” server returns a 503 mistake intermittently. It may cause a server crash if this server issue is persistent. However, it is too late to monitor 503 replies to avert the threat, as it means your server is already running out. On the other hand, it can be quite helpful to monitor 404 answers. An answer from 404 shows that the browser tried to communicate with a certain server but could not respond to the user’s request. You may set custom alerts using baseline metrics to receive real-time notifications on how often 404 occurs.

The easiest and most efficient approach to quickly identify a DDoS attack is log monitoring. Logs provide raw data that provide lots of information to discover real-time risks. You may collect data from different protocol stack layers using SolarWinds® PapertrailTM. The program provides a centralized logging function that allows you to analyze, save and see data in advanced dashboards for monitoring. The program also includes ongoing attack reporting, an appealing Web-based log viewer, robust command tools, secured logging, REST APIs, search, and customized alarms. It also helps to recognize the number of failures (503, 404 replies) issued to your users, impacted servers, and the exact time and date of unexpected traffic surges. You may also build intelligent custom alerts based on events by combining information based on traffic spikes and events. That enables you to get noticed by SMS, push alerts, or emails in real-time. The DDoS Prevention tools save you time to resolve problems by providing you with information on occurrences.

The earliest strategy to avoid a DDoS assault is too early identification of threats. Every firm is not prepared, while advanced anti-DDoS technologies are available on the market. In addition to detecting a DDoS assault, log analysis can allow you to neutralize an assault in time. For monitoring and avoiding such assaults, we propose cloud-based log analysis tools such as Papertrail. Learn more about how to prevent DDoS attacks from experts. Visit The Email Shop for more details.